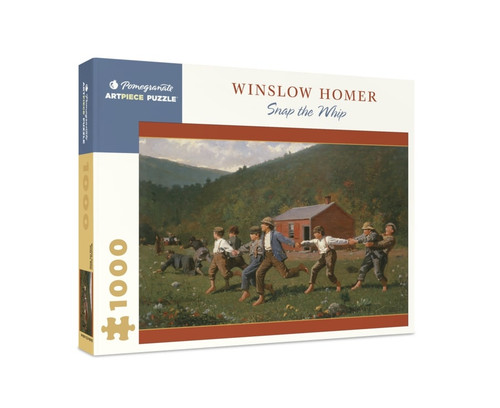 In Stock
This item Ships Free with orders $65+ Serious Item Code: 67746  Mfr Code: AA1066  Brand: Pomegranate Season: Theme: Event: Type: Difficulty: Advanced  Finished Size: 29'' x 20''
Snap the Whip, 1872 Wild energy fills Winslow Homer’s idyllic schoolhouse scene in Snap the Whip. This nostalgic work is a product of post–Civil War America, idolizing life away from cities and towns. It is full of strength and youth and hopeful prospects for the future—symbolic of a society rebuilding itself.

Winslow Homer (1836–1910) has justly been called America’s greatest artist. Beginning with the Civil War and throughout his career, he insightfully recorded the sweeping panorama of the nation’s life. Homer’s dynamic compositions and strong sense of design, color, and light imbued his subjects with a psychological truthfulness that was unprecedented in American art and introduced a new realism into what had been an overly sentimental tradition of genre painting. While quintessentially American, his work also paralleled such developments in European art as Impressionism and embodied universal themes that transcended national concerns. Many of his works—depictions of children at play and in school, of farm girls attending to their work, of hunters and their prey—have become classic images of 19th-century American life. Others speak to more universal themes such as the primal relationship of man and nature. In every instance Homer’s art delights us with its sheer beauty and inspires us with its vision of American culture.