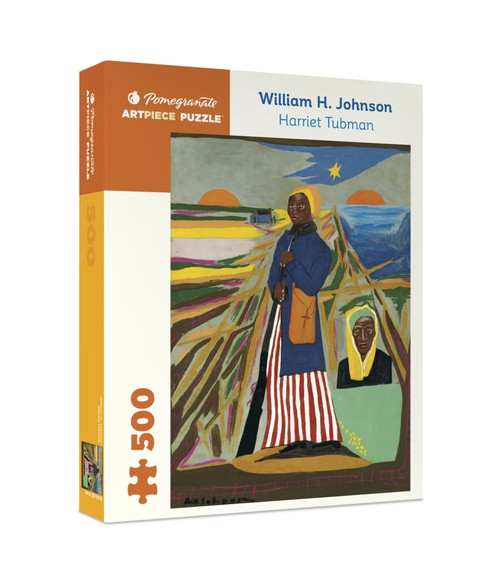 In Stock
This item Ships Free with orders $65+ Serious Item Code: 67759  Mfr Code: AA1078  Brand: Pomegranate Season: Theme: Event: Type: Difficulty: Intermediate  Finished Size: 18'' x 24''
Harriet Tubman, c. 1945 Harriet Tubman’s striking, resolute figure stands at attention in this painting by William H. Johnson, part of his 1945 Fighters for Freedom series. The American artist had returned to the United States from Scandinavia only a few years earlier, motivated by the threat of war and a need to paint the lives and histories of black Americans. He created numerous powerful scenes, such as the painting featured for this 500-piece jigsaw puzzle.

A prize-winning artist while still in his teens, African American modernist William H. Johnson (1901–1970) enjoyed an art career that spanned decades and continents. After his youth in South Carolina and New York, Johnson spent the late 1920s and 1930s traveling throughout Europe before settling in Denmark, where he married Danish artist Holcha Krake. As he absorbed the lessons of European modernism, his work became increasingly expressive and emotional. Along with the threat of war in the late ’30s, Johnson’s desire to “paint his own people” prompted him to return to the United States, where he created powerful scenes of African American life in New York and the rural South in a colorful, consciously folk art style. The last 30 years of his life were tragically marked by mental illness, and from his prolific earlier years, he drifted into obscurity. Today he is considered one of the most important African American artists of his generation.