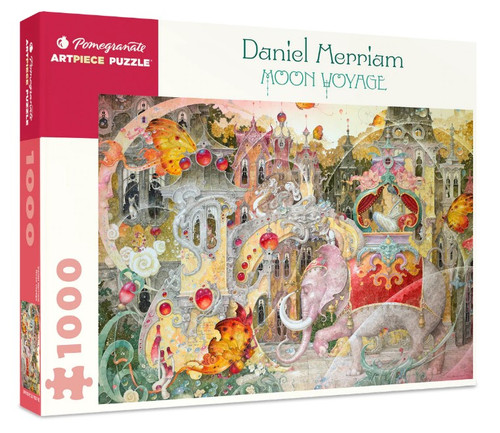 In Stock
This item Ships Free with orders $65+ Serious Item Code: 72307  Mfr Code: AA1137  Brand: Pomegranate Season: Theme: Event: Type: Difficulty: Advanced  Finished Size: 29'' x 20''
Moon Voyage, 2003 Voyage into dreamland. Daniel Merriam’s romantic Moon Voyage offers adventure and whimsy in a painted world of light and love, enigmatic animals and winged creatures. The artist says his paintings are vehicles for his dreams, not the product of them, so jump in and take the story wherever you choose. Visit the man in the moon and lend an ear to a minstrel singing his heart out. With each of this puzzle’s thousand pieces, you’ll become acquainted with Merriam’s surreal lullaby. Or is it a rhapsody? You decide.