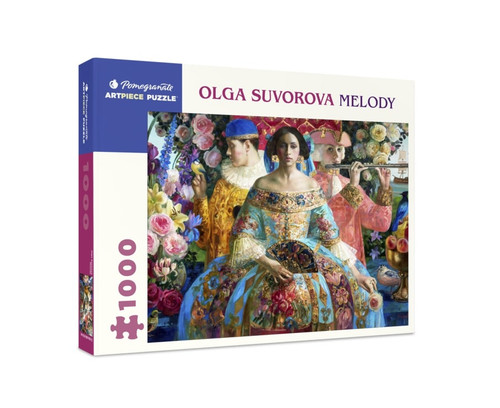 In Stock
This item Ships Free with orders $65+ Serious Item Code: 67750  Mfr Code: AA1070  Brand: Pomegranate Season: Theme: Event: Type: Difficulty: Advanced  Finished Size: 27'' x 20''
Melody, Variation 2, 2018 The music is playing, and the dance is about to begin. Russian artist Olga Suvorova takes us to a 16th-century Italian theatrical comedy in her lavish oil painting. The costumes of silk, velvet, jewels, and embroideries are the stars, rounded out with musical instruments, flowers, and birds. This 1000-piece jigsaw puzzle reproduces her ornate artwork, delicate in feeling but full of undeniably boisterous color.

The lavish works of Olga Suvorova (Russian, b. 1966) center upon the commedia dell’arte, its characters and themes depicted in a signature style influenced by the Pre-Raphaelites, Gustav Klimt, and traditional Russian icons. Her ornate costumes—their silks and velvets, jewels and embroideries—are often the stars of any scene, which she rounds out with musical instruments, flowers, and birds. The result is a lush tapestry, delicate in feeling but full of undeniably boisterous color. Suvorova, who comes from a family of artists, is known for her portraiture, both at home in Russia and around the world. Her work has been featured in shows in the United States, China, and countries throughout Europe, and she exhibits regularly in Paris and London.