The Quest for Knowledge - 500pc Jigsaw Puzzle by Pomegranate NEW 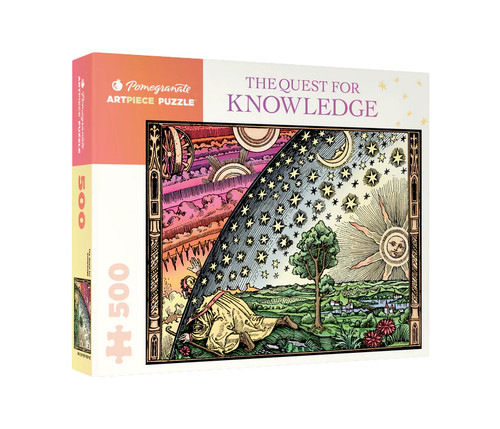 The Quest for Knowledge - 500pc Jigsaw Puzzle by Pomegranate

Unknown artist Flammarion engraving (color added), from L’atmosphère: météorologie populaire, 1888 The Flammarion engraving depicts a legendary scene, but the illustration’s origins have collected their own series of myths. The first documented appearance of the Flammarion engraving is in the 1888 L’atmosphère: météorologie populaire (The atmosphere: popular meteorology) by Camille Flammarion. Little is known definitively about the engraving aside from its original caption: “A missionary of the Middle Ages tells that he had found the point where the sky and the Earth touch.” Inspiringly, many have interpreted the image, reproduced in color on this 500-piece puzzle, as a quest for knowledge.Pomegranate is proud to produce jigsaw puzzles with thoughtfully conceived, engagingly intricate, and aesthetically appealing images on a solid interlocking format. The sturdy construction combined with the wide image selection and vibrant color reproduction will delight everyone from experts to first-time puzzlers.